Everything that does not fit the other categories.
Forum rules
- No: racism/SS/Nazi comments/names/squads. No flaming/insulting.
- No teamkilling on purpose/wait your turn for weapons & vehicles.
- No fighting/AFK commander
- ABC Lines & Main Bases: Do NOT fire into / out of there!
- Planes: only attack fixed positions behind ABCs.
Post Reply
266 posts

Let it work on you. 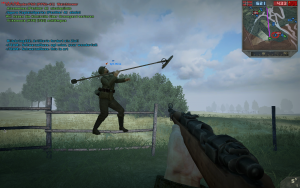 Here is another panorama

On map start I joined Squad 1 (Britain), got instantly switched to the German side and appeared again in squad 1. I couldn't leave this squad, nor could I be really kicked.
After getting kicked I still couldn't join another Squad and was still stuck to Squad 1. I tried everything but only a disconnect helped.

The strangest thing was the appearance of myself as SQL 1, after I was kicked out of the squad.
Even the Squad-counter counted 4 out of 6 members.

KICK LOGIC AND DO THE IMPOSSIBLE! THAT'S HOW TEAM GERMANY ROLLS!

german engineering exceeds where others have failed.

edit: the combination of lag and wonky physics interactions can often be entertaining.

add me on steam if you want to play together
Top

This time not a battle picture, but I drove by that sight today and thought it was worth taking a photo of it.

Let's not forget what happened in Europe so many times over. Let's remember that when we speak, vote, argue,
talk about one another in Europe.

In Flanders fields the poppies blow
Between the crosses, row on row,
That mark our place; and in the sky
The larks, still bravely singing, fly
Scarce heard amid the guns below.

We are the dead. Short days ago
We lived, felt dawn, saw sunset glow,
Loved, and were loved, and now we lie
In Flanders fields.

Take up our quarrel with the foe:
To you from failing hands we throw
The torch; be yours to hold it high.
If ye break faith with us who die
We shall not sleep, though poppies grow
In Flanders fields.

Users browsing this forum: No registered users and 2 guests